You are here: Home1 / Tavira and the “Sotavento” 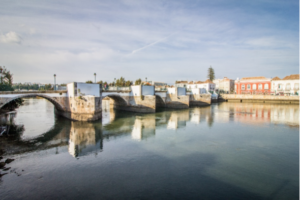 Tavira is a Portuguese town in the District of Faro with about 26,000 inhabitants. It is one of the most charming cities on the Algarve coast, and vies with Lagos in the west for the title of most authentic medium-sized city in the region. Tavira is located in the Sotavento, the leeward side of the Algarve, and a mere 30 minutes from Faro International Airport and the border with Spain (Ayamonte), and 3 hours from Lisbon.

A city with year-round activity yet retaining much of its quiet, town-like feel, it combines being the largest city in the east with a low-rise architecture which makes it still feel traditional and intimate. It is a counterbalance and contrast to the busier tourist resorts in the Algarve. The markets, including the famous building located on the banks of the Gilão River and the fresh market located near the salt pans, and fairs are an attraction for tourists and occasional visitors.

Tavira has a temperate Mediterranean climate. The annual average temperature is around 18°C. In August the maximum temperatures are around 30°C and the minimum temperatures are 19°C, while in January the highs are around 16°C and the lows are 7°C.
Sea temperatures rise to a very pleasant 26°C in the warmer months. Although the eastern Algarve has wonderful beaches, between Faro and Manta Rota, access is not direct, as the beaches are separated by the Parque Natural da Ria Formosa, a stunning set of interlocking islands and waterways which are a paradise for fish and birds. Although some walks along the coast are possible, for those who are seeking direct beach access, Tavira will be a compromise and it may be preferable to seek a base further east or west.

The “Mediterranean Diet”, classified as UNESCO intangible heritage (although there is nothing intangible about the succulent fish and seafood which is caught in this part of the Algarve) and which offers a diverse, healthy and tasty gastronomy, has appointed Tavira as the city representing the 7 Mediterranean states who make up the core of this dietary phenomenon. 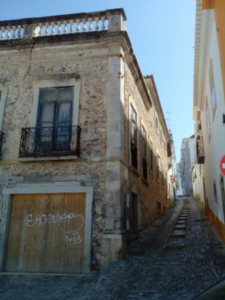 Because of its authentic feel and generally warm weather, Tavira is a popular real estate destination in the Algarve. Buyers in the eastern Algarve continue to be largely local, but certain nationalities, most notably Dutch and English initially, and Swedish of late, have “discovered” the benefits of being away from the busier Western Algarve.

Tavira’s layout makes it very easy to segment its real estate offering. The centre of the town is made up of historical and older properties, some of which have been refurbished and others representing an opportunity for buying and converting older properties. Although some riverside properties are expensive, the general opportunity to follow Lisbon and Lagos in a town centre redevelopment trend, exists on a smaller scale.

Bargains can still be found. Tavira’s town centre is mostly flat with a homogeneous building height generally not exceeding 4 floors. The topology means that sea views are very difficult to find in this part of town. Differently to other areas of the Algarve, city centre apartments often do not come with a balcony or terrace. These are two compromises if one is to live in this traditional city on the coast.

Those who seek sea views, will need to choose a location just north of the EN125, or move west to Luz de Tavira, which has few real estate options and minimal amenities. Cabanas, to the east, is an alternative in terms of proximity to the beach as the boat crossing and beach access can be done in a few minutes. The village, while maintaining some architectural character in the riverside areas, in a similar way as Fuseta and Santa Luzia, for example, is nonetheless characterised by new build 2 and 3 bedroom apartments and townhouses, set further back from the coast. 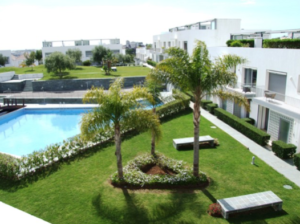 Although Tavira has still not experienced the property boom of other areas of the country, the relative lack of inventory, especially modern and new build, means that demand often outstrips supply.

Due to the limited parking and development opportunities in the centre, Tavira has expanded outwards from the centre and new residential neighbourhoods have sprung up over the last decade or two, both north of the EN125 and to the east of the River. The latter has also seen a number of important investments such as the improvement of the swimming and tennis facility, the construction of Tavira’s first mall, all of which are in this area, which also hosts a large weekly market.

The end user market for Tavira real estate was for many years Portuguese (and continues to be), but there has been a huge increase in demand from foreign buyers and winter residents, in particular the Swedish who have flocked to the area in large numbers in the winter, to play golf.

TAVIRA AS A RETIREMENT DESTINATION

Portugal’s NHR program has contributed significantly to the growth of foreign retirees resident in the city.

Tavira positions itself as an ideal destination for those looking to live in a medium-sized city with easy, flat access to all facilities and amenities, and a generally warmer client.

With several nationalities, most notably the French and Swedish, eager to find modern inventory, new build product in Tavira has sold very fast and has rented very well. We have access to many properties for sale and long-term rental across the city.