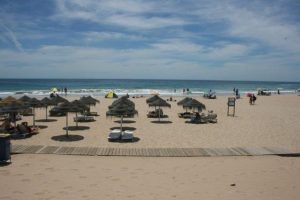 Praia da Luz, located 1 hour or 100 km west of the airport of Faro, was originally a traditional fishing village. It is the largest of a triad of fishing villages between Lagos and Sagres, and has transformed itself into one of the most desirable small town or large coastal villages in the Algarve. Initially a firm favourite of the English ex-patriot community, recent years have seen the arrival of residents and visitors from multiple countries, and it currently is one of the, if not the, most multinational locations in the region, by population size. 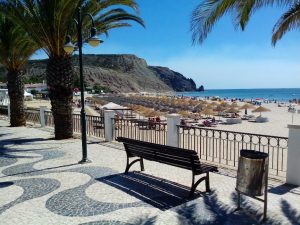 There are lots of restaurants, cafés and shops along the promenade, which runs behind the beach. Inside the town itself and spread around the main street or Rua Direita, visitors and residents will find two large supermarkets, a pharmacy, post office, cafés and take-away restaurants, bakeries, and a range of other expected amenities, including a store selling alternative and organic food products.
Despite its size, the town is alive all year round, with local residents, an increasing number of whom are foreign, occupying the place during the winter months. The local church is a landmark in the town, and across from it is a wonderful restaurant which includes a buffet lunch with jazz on Sundays.
The town has a local health centre served by a local GP (doctor), as well as a private clinic. It is also minutes from Lagos, which has a small public hospital and one of the region’s largest private hospitals.

The ruins of Roman baths dating back to the 3rd to 5th century A.D add a touch of history to an increasingly contemporary town, and prove that the preservation of the historical is still possible despite the land on which the ruins are located being prime real estate property.
The beach itself is fully accessible, one of the first to be so in the Algarve and access does not involve any stairs. A modern beach restaurant and lifeguards in the summer, plus a large flat sandy beach mean that contact with the ocean is easy. The coastline west of Luz is one of the most spectacular for walking enthusiasts, with a myriad of coastal walks with stunning vistas. In terms of sporting facilities, the town offers several private tennis courts, three golf courses within minutes’ drive and the only lawn bowls club in the far western Algarve. 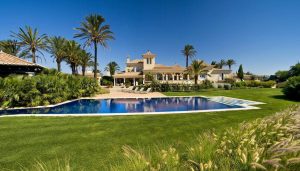 Praia da Luz has retained its appeal and attractiveness by retaining a relatively low-rise landscape. With the exception of one high-rise building dating back to the 1970s or 80s, all other buildings are limited to 3 floor plus an attic level. Despite its popularity, development continues to be limited to an area of less than 10 km² or 4 square miles, ranging from the ‘Black Rock’ in the east to the Porto Dona Maria development in the west, and between Bela Vista on the hillside and the village’s sandy beach. Although the village now boasts a wider selection of accommodation due to the development boom experienced prior to the 2008 crisis, there is still a shortage of accommodation (the village currently only has two hotels) and additional supply is provided via private holiday rentals. Despite its growth, therefore, much of Praia da Luz accommodation is easily accessible and within walking distance of the town and the beautiful beach, whose bay is sheltered by the ‘Black Rock’.
It is easy to see why Praia da Luz has been popular as a holiday destination, and it has slowly transformed itself into a winter residence for the retiree market. 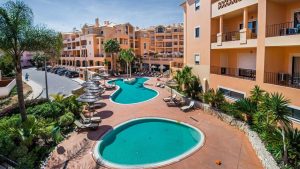 Much of this has occurred not only due to the unique location and amenities but because of the development, prior to the crisis, of integrated resorts which have had a broad appeal due to their contemporary design, their on-site services and amenities including indoor and outdoor pools, spa and treatment rooms, on-site restaurant and reception. This service-led model has driven other projects to seek to improve their customer focus and to cater for an increasingly demanding, yet not excessively sophisticated market.
The immediate result has been the increase in demand, which has outstripped supply, the increase in property values and a sustained lack of longer-term rental options. While talk of new hotels has been discussed for some time, no new developments are currently forecast, partly because suitable sites are rare. In fact, some of the suitable sites were previously owned by developers who experienced difficulties during the 2008-9 financial crisis. 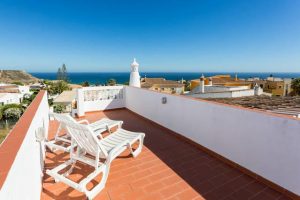 Historically, the traditional market for property in Praia da Luz has been the second home buyer. Typically foreign families, they have bought out the original Portuguese owners.
With the arrival of foreign development groups, Praia da Luz’s profile changed significantly in the late nineties and after the turn of the century. Before the 2008 financial crisis, English and Irish buyers dominated. Post-2008, with the fall of the Celtic Tiger economy, Irish buyers have all but disappeared (although the Irish love Portugal). The English have lost their position as the largest buying group to the French, and other nationalities such as Scandinavian, Benelux and even American, have grown their presence significantly in the last 2 years.

LUZ AS A RETIREMENT DESTINATION

As families have been under financial pressure, it has been the retiree market which has increasingly taken up the baton as primary investors. Retirees or seniors have disposable income, they look equally for rental options or for property to buy, and they seek smaller, manageable properties, with services and amenities, and proximity to the centres of authentic towns with good beach and services access. Praia da Luz immediately stands out as matching all these criteria. Faced with this opportunity, no new condominium or apartment development has been built in the town in the last decade, and only after the demand of the last two years, has inventory built pre-crisis, finally been absorbed by the market. Product in Luz tends to move very quickly.